For the group show Interwoven Histories (with Mounira Al Solh, Fatima Barznge, Antonio José Guzman & Iva Jankovic, Patricia Kaersenhout, Mila Lanfermeijer, Jennifer Tee, Vincent Vulsma en Sheila Hicks, curated by Christel Vesters, at Rozenstraat (Amsterdam)) the FHP aligned itself with the strength and inspiration of its foremothers and re-instated the banner as site where activism and needlework – so often depolitised - meet. Surrounded by the FHP-costumes and an historical suffragettes banner from the Atria archive (Amsterdam), in four gatherings, different hands collectively picked up needle and thread and engaged in the (symbolic) act of deconstructing an old Catholic banner devoted to the Holy Family and constructing a new image whilst reading and discussing Max Dashú's seminal book Witches and Pagans: Women in European Folk Religion 700-1100 (2017).

Fully in line with the the FHP principle of allowing needlework and studying to become completely intertwined, striving to unlearn the deep-rooted tendency to elicit a hierarchic separation between body and mind, we meandered through our hands, text, tactility, our bodies and personal as well as academic memories of our foremothers.

The nuclear family (as well as the Holy Family) is still a dominant ideal in Western society, but this hasn’t always been the case. It took the expropriation of common land, collective relationships (the commons) and the execution of thousands of women in the witch hunt from the 15th century on, in order to break female resistance and solidarity between women and to establish the current ideal of the nuclear family. Can we discover ways of repairing history with our threads and needles?
The book Witches and Pagans proofed to be an amazing source of information about the suppressed history of the crafts of spinning, weaving, plaiting, wickerwork and knotting, which was a central sacrament of tribal European religion. The faith in old spinning-women-godesses, known as Berthe spinning at the beginning of time, the weaving Werd or Laima, the Norns who were spinning the thread of faith at the foot of the world tree Yggdrasil, Frau Holle, Perchta, Kostroma and many others, persisted for thousands of years despite continual attempts by the church to eradicate this tradition. Exemplary are the many places in Europa that are named after Frau Holle (for example the holy mountain Horselberg was seen as her residence and sanctuary) and there were many sacrificial rites dedicated to her, such as putting out at night spindles wrapped with tufts of wool, thread, or cloth. Frau Holle, the spirit of the Earth, whose water and air she inhabited, was shaggy, like Perchta and the Sorbian Pshi-Polnitsa. The German expression "riding with Holle" referred to people with "wild" hair as well as those who went on a witches' ride.

During our final gathering Max Dashú presented a visual presentation bringing in focus these suppressed pagan histories, while the spinner Diana Lankhof spun thread with distaff and spindle. 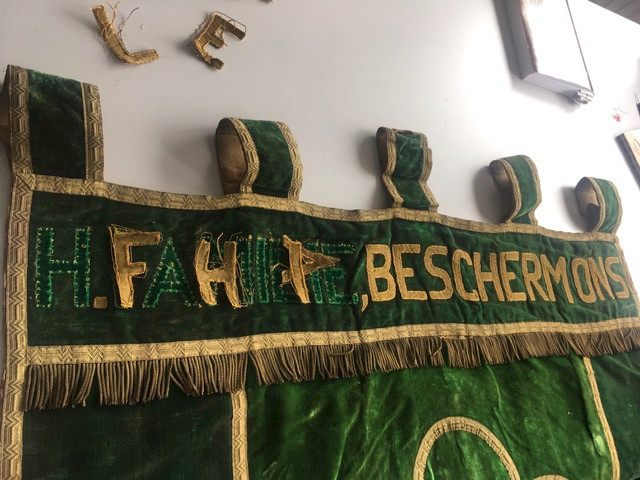